The LSSC Leesburg campus was an Army Air Corps barracks and a German POW camp during World War II. In 1942, the United States Army established an army air base, which extended from the current campus site across nearby US Highway 441. Today's campus buildings sit where the base's barracks were constructed. The site was home to the 313th Tactical Fighter Squadron for a short time in 1943. After the 313th Tactical Fighter Squadron had left the location, German Prisoners of War (POWs) moved into the barracks after being transferred to Leesburg from Camp Blanding, near Starke, FL. The Leesburg camp housed 250 POWs and boasted one of the lowest rates of escape for prisoners in the county.

Title
A day as a POW not as usual.
Abstract / Description
A narrative recollection by Herman Boettjer about Christmas Eve, 1943 picking oranges while a POW at Camp Leesburg, Florida.

Title
Camp Leesburg Map, 1943.
Abstract / Description
A map of the Camp Leesburg army air corps base, home to the German POW Camp from 1943-45 on the edge of Silver Lake, Lake County, Florida. 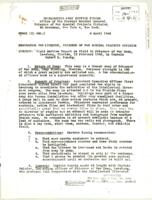 Title
Field Service Report on Visit to Prisoner Of War Camp, Leesburg, Florida.
Abstract / Description
A field service report discussing the Prisoner of War camp at Silver Lake, Florida from 1945. The report was issued by the Army Service Forces Headquarters, Office of the Provost Marshal General and contains progress summaries and recommendations by Captain Robert L. Kunzig who made a visit to the camp.

Title
Memories of a Prisoner of War in Leesburg, Florida.
Abstract / Description
A narrative by former POW Haus Bruns about incidents that occurred at Camp Leesburg in October 1943 involving rule breaking. 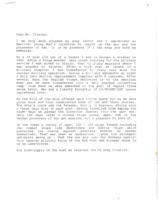 Title
POW Narrative and Documents - Fritz Fitting.
Abstract / Description
A collection of documents from Fritz Fitting, a former German POW at Camp Leesburg. Includes discussions of daily life and timeline of events for Fitting from 1943 - 1954.