Lake-Sumter Junior College was formed in 1962 by the Florida Legislature following a concerted effort by the citizens of Lake County, Sumter County, and the Leesburg Chamber of Commerce to create an institution of higher education. A planning committee was formed to promote local support, headed by Marie B. Bowden of the Minute Maid Corporation. The committee was advised to seek letters of support from city governments, chambers of commerce, civic clubs, and other citizen groups. Several different sites were considered, including Tavares, Mt. Dora and Wildwood, but it was in Leesburg that the campus found an official home. Seventy acres of land was donated to the college by the city of Leesburg in June of 1962, and in the fall of that year, Lake-Sumter Junior College began operating under the Florida Division of Community Colleges.

Title
Leesburg Airport Site Official Prospectus.
Abstract / Description
The official prospectus for the Lake-Sumter Junior College site located in Leesburg, Florida. Included in the document are the legal description of the property, maps, official inquiries, and discussion of offices and temporary facilities. 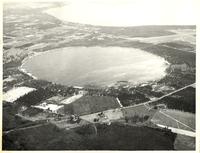